The Point-of-Sale (PoS) represents the contact point between a customer wanting to pay with MobilePay and the merchant. To initiate a MobilePay payment it is necessary to first create a PoS.

Each PoS belongs to a Store which belongs to a Brand. A brand can be thought of as a combination of a name and a logo. An example of a brand could be 7-Eleven in Denmark or K-Market in Finland. Each brand consists of one or more stores. A store is the representation of a merchant's shop. It contains a storeId as well as the name and the address of the shop. When a MobilePay customer checks in on a PoS they will see the brand logo and name as well as the shop name in the app, which helps the customer confirm that they have in fact checked in where they intended. When an integrator needs to onboard a PoS they need the storeId to create all the PoSes on that store. The storeId will therefore have to be persisted in an application configuration file for subsequent calls to the V10 API. There are generally two ways to acquire the storeId. The recommended option depends on the merchant being a migrated merchant or not. The two different approaches are described below.

When an integrator is building a new integration for a merchant they need to know the store to which the PoS should be created. The goal is to get a list of all the stores that belongs to a merchant and then use the storeId from the appropriate store to create the PoS. First the integrator needs to call GET /v10/stores without any query parameters and the endpoint will return all the storeIds based on the Merchant VAT either provided in the x-mobilepay-merchant-vat-number header or provided in the access token (see Authentication). Then the integrator will loop through the list and for each storeId call GET /v10/stores/{storeid} that will return the store information for that specific store. In the end the integrator have a list of all the stores the merchant has and then the integrator knows which storeId for each store to use when creating a PoS. Below diagram illustrates a flow to get all merchant stores. 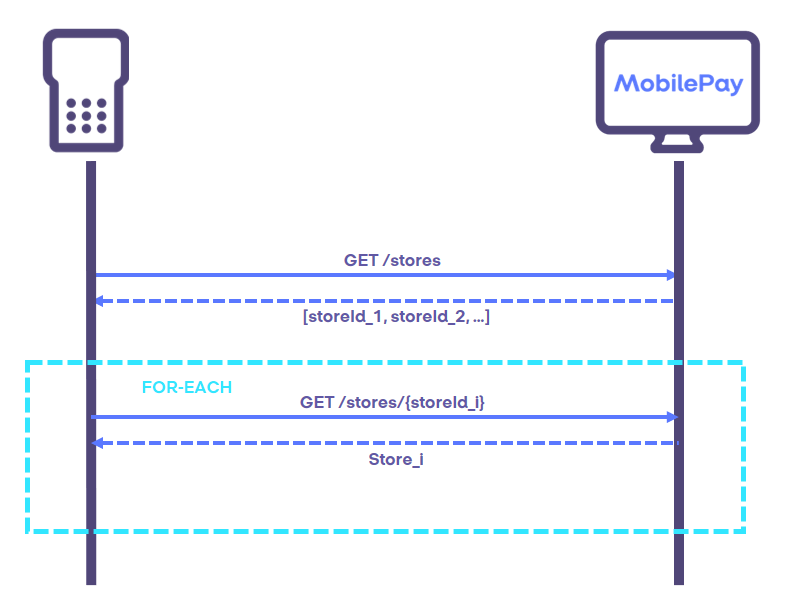 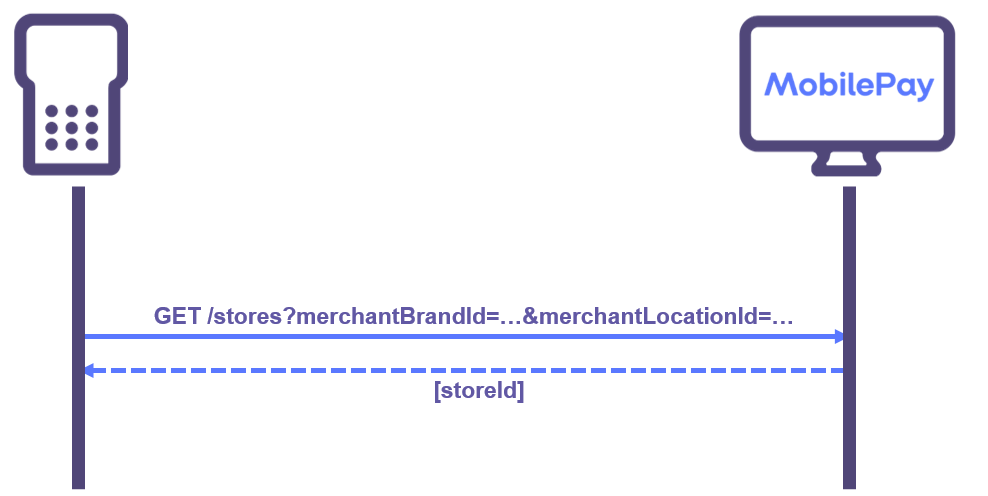 A PoS is created using the POST /v10/pointofsales endpoint. A PoS is identified in the PoS V10 API by a posId that is assigned by MobilePay upon creation of the PoS. Clients can provide their own internal identifier as a merchantPosId upon creation and use the GET /v10/pointofsales endpoint to lookup a posId based on a merchantPosId. The merchantPosId field is required, so if no internal identifier is applicable, the client should generate and supply a random string (eg. a fresh GUID) instead.

The first thing to consider when creating a PoS is what beacon(s) will be used to connect MobilePay users to the given PoS. This can range from an unmanned vending machine that has no payment hardware at all and hence only shows a QR code on a screen, to a full fledged super market ECR with a 2-way bluetooth capable terminal that also can show a QR code. To create a PoS, the client needs to provide a list of possible ways to detect the PoS. The more accurate the list is, the better MobilePay will be able to detect errors (if bluetooth is provided as a beacon type but we detect that no user ever checks in via bluetooth something is likely wrong). It is recommended to keep the list of supported beacon types in an application configuration and then edit the list in case the setup changes.

Each beacon, whether through a MobilePay QR code or a bluetooth/NFC signal, encodes a beaconId that can be read by the MobilePay app. It is the beaconId that is used to connect a MobilePay user to a specific PoS. beaconIds are globally unique across all merchants in MobilePay PoS and each beaconId can refer to at most one active PoS at any given time.

Depending on the client setup, there are different use cases for handling beaconIds in API V10

In case the client only allows QR beacons but is not able to generate a QR code dynamically, the client needs the beaconId for the PoS creation. The following options are available:

If stickers are needed as the acceptance device, we suggest that you use MobilePay to help deliver QR-code stickers to your merchants using option 2.

NOTE: The easiest way of handling stickers is if the client is set up to support activation and deactivation of QR codes directly from the merchant location.

You can order the stickers directly from MobilePay’s print supplier’s sticker webshop, and the Beacon IDs and QR codes will automatically be generated. The BeaconId will be printed on the sticker, so that it can be added by the merchant, or the merchant can report to you, which Beacon IDs the merchant uses.

The beaconId should then be stored locally in a configuration file so that it can be used if the PoS needs to be updated (i.e. deleted and re-created. See PoS Update and Deletion). To avoid clashes, the client must use a GUID as the beaconId.

In cases where the client uses a physical device then that device will have a MobilePay beaconId associated with it. On PoS creation this beaconId has to be provided. Some devices allows a client to read the beaconId from it. If that is the case we recommend to read the beaconId when the client reboots and query the PoS to see if the beaconIds match. If not delete the PoS and re-create it with the new beaconId. This will make it possible to replace the device if its broken, and only have to reboot the system to propagate the changes. If reading the beaconId from the device is not possible, we recommend to store the beaconId locally in a configuration file so that it persists through reboots.

For example, in a self-service solution, a user could check in on a point of sale, walk away, and then they'll get paired to the next user's payment if the next user does not take over the check-in in time.

If the client system cannot detect when a MobilePay user wants to pay and therefore needs to use the Notification service, the client should set the callback parameter accordingly when calling POST /v10/pointofsales. It is recommended to store the callback alias in the config file of the application.

The last thing to keep in mind when creating a PoS is to consider the name. When a MobilePay user checks in on the PoS they will in the app see, in sequence: The name of the brand, the name of the store and the name of the PoS. We recommend naming the PoS so that the MobilePay user can verify that they in fact have checked in the right place. So in a supermarket scenario a good name for the PoS would be "Check-out 1" for the first check-out counter in that supermarket.

A PoS can be deleted using the DELETE /v10/pointofsales/{posId} endpoint.

We recommend only deleting a PoS if it is either not going to be used anymore, or you need to update it to reflect changes like a new callback alias, new name, new beaconId etc.

When a PoS is deleted it is no longer possible to issue payments. However it will still be possible to capture or cancel payments that are in the reserved state. It is best practice to delay the deletion of a PoS until all payments have either been cancelled or captured.

Keeping in sync with MobilePay

When the client reboots it is good practice to query the PoS with GET /v10/pointofsales with the merchantPosId and persist the posId in memory to use for initiating payments. If no PoS is returned, the client will have to re-create it. Here is the flow described:

We recommend the client to store the following in a configuration file to be able to create the PoS when needed: